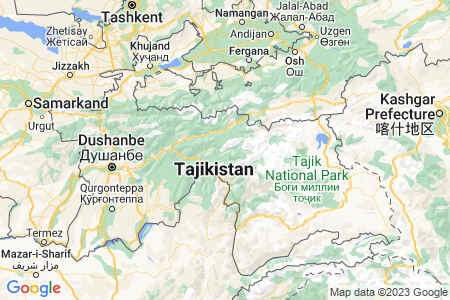 Tajikistan ( (listen), ; Tajik: Тоҷикистон [tɔdʒikisˈtɔn]), officially the Republic of Tajikistan (Tajik: Ҷумҳурии Тоҷикистон, Jumhurii Tojikiston) is a mountainous, landlocked country in Central Asia with an area of 143,100 km2 (55,300 sq mi) and an estimated population of 9,275,828 people. It is bordered by Afghanistan to the south, Uzbekistan to the west, Kyrgyzstan to the north, and China to the east. The traditional homelands of the Tajik people include present-day Tajikistan as well as parts of Afghanistan and Uzbekistan.
The territory that now constitutes Tajikistan was previously home to several ancient cultures, including the city of Sarazm of the Neolithic and the Bronze Age, and was later home to kingdoms ruled by people of different faiths and cultures, including the Oxus civilisation, Andronovo culture, Buddhism, Nestorian Christianity, Zoroastrianism, Manichaeism and Islam. The area has been ruled by numerous empires and dynasties, including the Achaemenid Empire, Sasanian Empire, Hephthalite Empire, Samanid Empire, Mongol Empire, Timurid dynasty, the Khanate of Bukhara, the Russian Empire, and subsequently the Soviet Union. Within the Soviet Union, the country's modern borders were drawn when it was part of Uzbekistan as an autonomous republic before becoming a full-fledged Soviet republic in 1929.On 9 September 1991, Tajikistan became an independent sovereign nation when the Soviet Union disintegrated. A civil war was fought almost immediately after independence, lasting from 1992 to 1997. Since the end of the war, newly established political stability and foreign aid have allowed the country's economy to grow. Like all other Central Asian neighbouring states, the country, led by President Emomali Rahmon since 1994, has been criticised by a number of non-governmental organizations for authoritarian leadership, lack of religious freedom, corruption and widespread violations of human rights.
Tajikistan is a presidential republic consisting of four provinces. Most of Tajikistan's population belongs to the Tajik ethnic group, who speak Tajik (a dialect of Persian). Russian is used as the inter-ethnic language. While the state is constitutionally secular, Islam is practiced by 98% of the population. In the Gorno-Badakhshan Oblast of Tajikistan, despite its sparse population, there is large linguistic diversity where Rushani, Shughni, Ishkashimi, Wakhi and Tajik are some of the languages spoken. Mountains cover more than 90% of the country. It has a transition economy that is highly dependent on remittances, aluminium and cotton production. Tajikistan is a member of the United Nations, CIS, OSCE, OIC, ECO, SCO and CSTO as well as an NATO PfP partner.