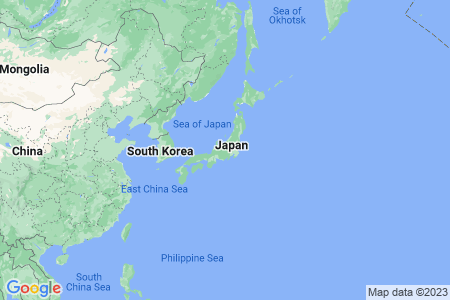 Japan (Japanese: 日本, Nippon [ɲippoꜜɴ] (listen) or Nihon [ɲihoꜜɴ] (listen)) is an island country of East Asia in the northwest Pacific Ocean. It borders the Sea of Japan to the west and extends from the Sea of Okhotsk in the north to the East China Sea and Taiwan in the south. Japan is part of the Pacific Ring of Fire and comprises an archipelago of 6,852 islands covering 377,975 square kilometers (145,937 sq mi); its five main islands, from north to south, are Hokkaido, Honshu, Shikoku, Kyushu, and Okinawa. Tokyo is the country's capital and largest city; other major cities include Osaka and Nagoya.
Japan is the eleventh-most populous country in the world, as well as one of the most densely populated and urbanized. About three-fourths of the country's terrain is mountainous, concentrating its population of 126.2 million on narrow coastal plains. Japan is administratively divided into 47 prefectures and traditionally divided into eight regions. The Greater Tokyo Area is the most populous metropolitan area in the world, with more than 37.4 million residents.
The islands of Japan were inhabited as early as the Upper Paleolithic period, though the first mentions of the archipelago appear in Chinese chronicles from the 1st century AD. Between the 4th and 9th centuries, the kingdoms of Japan became unified under an emperor and imperial court based in Heian-kyō. Starting in the 12th century, however, political power was held by a series of military dictators (shōgun), feudal lords (daimyō), and a class of warrior nobility (samurai). After a century-long period of civil war, the country was reunified in 1603 under the Tokugawa shogunate, which enacted a foreign policy of isolation. In 1854, a United States fleet forced Japan to open trade to the West, leading to the end of the shogunate and the restoration of imperial power in 1868. In the Meiji era, the Empire of Japan adopted a Western-style constitution and pursued industrialization and modernization. Japan invaded China in 1937; in 1941, it entered World War II as an Axis power. After suffering defeat in the Pacific War and two atomic bombings, Japan surrendered in 1945 and came under an Allied occupation, during which it adopted a post-war constitution. It has since maintained a unitary parliamentary constitutional monarchy with an elected legislature known as the National Diet.
Japan is a great power and a member of numerous international organizations, including the United Nations (since 1956), the OECD, and the G7. Although it has renounced its right to declare war, the country maintains a modern military ranked as the world's fourth-most powerful. Following World War II, Japan experienced high economic growth, becoming the second-largest economy in the world by 1990 before being surpassed by China in 2010. Despite stagnant economic growth ever since the Lost Decade, the country's economy is still the third-largest in the world by nominal GDP and the fourth-largest by PPP. Japan is a global leader in the automotive and electronics industries and has made significant contributions to science and technology. Ranked the second-highest country on the Human Development Index in Asia after Singapore, Japan also has the world's second-highest life expectancy, though it is currently experiencing a decline in population. Japan has one of the richest cultures in the world, and is renowned for its art, cuisine, music, and popular culture, including its prominent animation and video game industries.