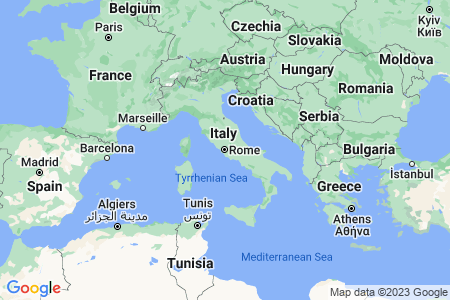 Italy (Italian: Italia [iˈtaːlja] (listen)), officially the Italian Republic (Italian: Repubblica Italiana [reˈpubblika itaˈljaːna]), is a country located in the middle of the Mediterranean Sea, in Southern Europe; its territory largely coincides with the homonymous geographical region. Italy is also considered part of Western Europe. A unitary parliamentary republic with Rome as its capital and largest city, the country covers a total area of 301,230 km2 (116,310 sq mi) and shares land borders with France, Switzerland, Austria, Slovenia and the enclaved microstates of Vatican City and San Marino. Italy has a territorial exclave in Switzerland, Campione. With over 60 million inhabitants, Italy is the third-most populous member state of the European Union.
Due to its central geographic location in Southern Europe and the Mediterranean, Italy has historically been home to myriad peoples and culture, such as the Italic peoples, the Etruscans, the Celts, the Greeks and other ancient peoples. The Latins formed the Roman Kingdom in the 8th century BC, which eventually became a republic with a government of the Senate and the People. The Roman Republic initially conquered and assimilated its neighbours on the Italian peninsula, eventually expanding and conquering parts of Europe, North Africa and Asia. By the first century BC, the Roman Empire emerged as the dominant power in the Mediterranean Basin and became a leading cultural, political and religious centre, inaugurating the Pax Romana, a period of more than 200 years during which Italy's law, technology, economy, art, and literature developed.During the Early Middle Ages, Italy endured the fall of the Western Roman Empire and the Barbarian Invasions, but by the 11th century, numerous city-states and maritime republics, mostly in the North, became prosperous through trade, commerce, and banking, laying the groundwork for modern capitalism. The Renaissance began in Italy and spread to the rest of Europe, bringing a renewed interest in humanism, science, exploration, and art. During the Middle Ages, Italian explorers discovered new routes to the Far East and the New World, helping to usher in the European Age of Discovery. Italy's commercial and political power significantly waned with the opening of trade routes that bypassed the Mediterranean. Centuries of rivalry and infighting between the Italian city-states, and the invasions of other European powers during the Italian Wars of the 15th and 16th centuries, left parts of Italy politically fragmented.By the mid-19th century, rising Italian nationalism, along with other social, economic, and military events, led to a period of revolutionary political upheaval. After centuries of political and territorial divisions, Italy was almost entirely unified in 1861 following a war of independence, establishing the Kingdom of Italy. From the late 19th century to the early 20th century, Italy rapidly industrialised, mainly in the north, and acquired a colonial empire, while the south remained largely impoverished and excluded from industrialisation, fuelling a large and influential diaspora. Despite being one of the victorious allied powers in World War I, Italy entered a period of economic crisis and social turmoil, leading to the rise of the Italian fascist dictatorship in 1922. The participation of Fascist Italy in World War II on the Axis side ended in military defeat. Following the rise of the Italian Resistance and the subsequent Italian Civil War and liberation of Italy, the country abolished its monarchy, established a democratic Republic, enjoyed a prolonged economic boom, and became a highly developed country.Italy has an advanced economy, being the tenth-largest nominal GDP (third in the European Union) in the world, the ninth-largest by national wealth and the third-largest by central bank gold reserve. It ranks highly in life expectancy, quality of life, healthcare, and education. The country is a great power, and it has a significant role in regional and global economic, military, cultural, and diplomatic affairs. Italy is a founding and leading member of the European Union and a member of numerous international institutions, including the United Nations, NATO, the OECD, the G7, the Latin Union, the Schengen Area, and many more. The source of many inventions and discoveries, the country is considered a Cultural Superpower and has long been a global centre of art, music, literature, philosophy, science and technology, tourism and fashion, as well as having greatly influenced and contributed to diverse fields including cinema, cuisine, sports, jurisprudence, banking, and business. It has the world's largest number of World Heritage Sites (58), and is the world's fifth-most visited country.