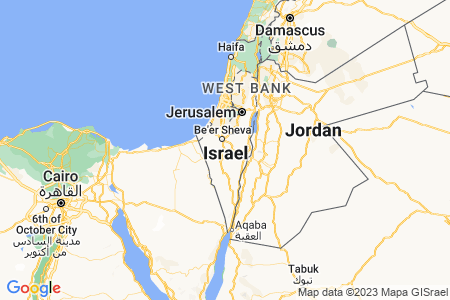 Israel (; Hebrew: יִשְׂרָאֵל‎; Arabic: إِسْرَائِيل‎), officially known as the State of Israel (Hebrew: מְדִינַת יִשְׂרָאֵל‎, Medinat Yisra'el), is a country in Western Asia, located on the southeastern shore of the Mediterranean Sea and the northern shore of the Red Sea. It has land borders with Lebanon to the north, Syria to the northeast, Jordan on the east, the Palestinian territories of the West Bank and the Gaza Strip to the east and west, respectively, and Egypt to the southwest. Israel's economic and technological center is Tel Aviv, while its seat of government and proclaimed capital is Jerusalem, although international recognition of the state's sovereignty over Jerusalem is limited.Israel has evidence of the earliest migration of hominids out of Africa. Canaanite tribes are archaeologically attested since the Middle Bronze Age, while the Kingdoms of Israel and Judah emerged during the Iron Age. The Neo-Assyrian Empire destroyed Israel around 720 BCE. Judah was later conquered by the Babylonian, Persian and Hellenistic empires and had existed as Jewish autonomous provinces. The successful Maccabean Revolt led to an independent Hasmonean kingdom by 110 BCE, which in 63 BCE however became a client state of the Roman Republic that subsequently installed the Herodian dynasty in 37 BCE, and in 6 CE created the Roman province of Judea. Judea lasted as a Roman province until the failed Jewish revolts resulted in widespread destruction, the expulsion of the Jewish population and the renaming of the region from Iudaea to Syria Palaestina. Jewish presence in the region has persisted to a certain extent over the centuries. In the 7th century CE, the Levant was taken from the Byzantine Empire by the Arabs and remained in Muslim control until the First Crusade of 1099, followed by the Ayyubid conquest of 1187. The Mamluk Sultanate of Egypt extended its control over the Levant in the 13th century until its defeat by the Ottoman Empire in 1517. During the 19th century, national awakening among Jews led to the establishment of the Zionist movement followed by immigration to Palestine.
The land was controlled as a mandate of the British Empire from 1920 to 1948, having been ceded by the Ottomans at the end of the First World War. Not long after, the Second World War saw the mandate bombed heavily and Yishuv Jews serve for the Allies, after the British agreed to supply arms and form a Jewish Brigade in 1944. Amidst growing tension and with the British eager to appease both Arab and Jewish factions, the United Nations (UN) adopted a Partition Plan for Palestine in 1947 recommending the creation of independent Arab and Jewish states and an internationalized Jerusalem. The plan was accepted by the Jewish Agency, and rejected by Arab leaders. The following year, the Jewish Agency declared the independence of the State of Israel, and the subsequent 1948 Arab–Israeli War saw Israel's establishment over most of the former Mandate territory, while the West Bank and Gaza were held by neighboring Arab states. Israel has since fought several wars with Arab countries, and since the Six-Day War in June 1967 held occupied territories including the West Bank, Golan Heights and the Gaza Strip (still considered occupied after the 2005 disengagement, although some legal experts dispute this claim). Subsequent legislative acts have resulted in the full application of Israeli law within the Golan Heights and East Jerusalem, as well as its partial application in the West Bank via "pipelining" into Israeli settlements. Israel's occupation of the Palestinian territories is internationally considered to be the world's longest military occupation in modern times. Efforts to resolve the Israeli–Palestinian conflict have not resulted in a final peace agreement, while Israel has signed peace treaties with both Egypt and Jordan.
In its Basic Laws, Israel defines itself as a Jewish and democratic state and the nation state of the Jewish people. The country is a liberal democracy with a parliamentary system, proportional representation, and universal suffrage. The prime minister is head of government and the Knesset is the legislature. With a population of around 9 million as of 2019, Israel is a developed country and an OECD member. It has the world's 31st-largest economy by nominal GDP, and is the most developed country currently in conflict. It has the highest standard of living in the Middle East, and ranks among the world's top countries by percentage of citizens with military training, percentage of citizens holding a tertiary education degree, research and development spending by GDP percentage, women's safety, life expectancy, innovativeness, and happiness.