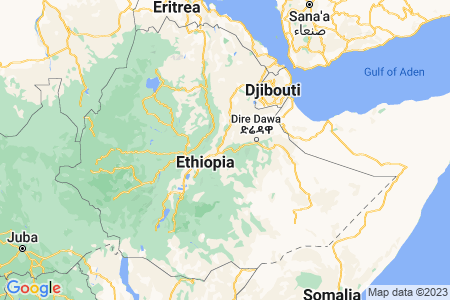 Ethiopia, officially the Federal Democratic Republic of Ethiopia, is a landlocked country in the Horn of Africa. It shares borders with Eritrea and Djibouti to the north, Somaliland to the northeast, Somalia to the east, Kenya to the south, South Sudan to the west and Sudan to the northwest. Ethiopia has a total area of 1,100,000 square kilometres (420,000 sq mi) and over 117 million inhabitants and is the 12th-most populous country in the world and the 2nd-most populous in Africa after Nigeria. The national capital and largest city, Addis Ababa, lies several kilometres west of the East African Rift that splits the country into the African and Somali tectonic plates.Anatomically modern humans emerged from modern-Ethiopia and set out to the Near East and elsewhere beginning in the Middle Paleolithic. In Neolithic times, Afro-Asiatic speaking people reportedly settled in the Nile Valley, dispersing thereafter. In first century, the Kingdom of Aksum emerged as great power in what is now northern Ethiopia, Eritrea and eastern part of Sudan, flourished strong assimilating culture for Ethiopian national identity. During this age, Orthodox Tewahedo Christianity was conceived as state religion and the introduction of Islam in early 7th century. Aksum suffered from recurring external sieges beginning in the Early Middle Ages, and collapsed in early 10th century when female anti-Christian pagan ruler Gudit conducted a raid. The remnant of Aksum fled southward and formed the Zagwe dynasty, ruling for over three centuries.
In 1270, the Ethiopian Empire was formed by Yekuno Amlak, who claimed that the Solomonic dynasty descended from Biblical Solomon and Queen of Sheba via their child Menelik I. The empire saw significant territorial evolution in the Middle Ages, albeit challenged by Muslim polities, the Sultanate of Ifat and its successor Adal Sultanate. Both the Christian (Ethiopia) and Muslim (Adal) polities fought 13 years lasted religious war, until the Ethiopian Empire recaptured its lost vassal state in 1543. In the mid-18th century, Ethiopia experienced decentralization known as Zemene Mesafint – the Emperor became a figurehead controlled by powerful lords such as Yejju Oromos. Imperial power was restored by Emperor Tewodros II at the beginning of his reign in 1855, inaugurating modernization for subsequent emperors.
Under Emperor Menelik II, Ethiopia became the sole independent African nation during the late 19th century Scramble for Africa against the European colonial powers, defeating Italy at the Battle of Adwa in 1896. Menelik II proceeded extensive annexations of remaining kingdoms that would later concluded with the modern border. Ethiopia was the first independent African nation member of League of Nations and the United Nations. In 1935, the Fascist Italian force invaded Ethiopia and annexed with the former colonies of Eritrea and Somaliland that later formed Italian East Africa, but Ethiopia was soon liberated by British army in 1941 and entered a short period of British military administration.Emperor Haile Selassie worked to modernize Ethiopia until the Derg, a communist military junta backed by the Soviet Union, overthrew him in a coup in 1974 and abolished the monarchy. The Derg waged a 16-year civil war with Tigray-Eritrean separatist rebels and Somalia before finally being overthrown by the Ethiopian People's Revolutionary Democratic Front (EPDRF) in 1991. The EPRDF coalition-led government, led by the Tigray People's Liberation Front (TPLF), was an authoritarian regime and brought the country into the current form of ethnic federalism. After Prime Minister Abiy Ahmed came to power 2018, he ousted the EPDRF and substituted it with his Prosperity Party in 2019. Abiy's tenure amended and liberated the country's policies, but ethnic violence resurged exceptionally, sparking hostility with TPLF members, leading to the ongoing Tigray War in 2020.
Ethiopia is a multiethnic state with 80 different ethnic groups. Christianity is the largest religion followed by Islam. This sovereign state is a founding member of the UN, the Group of 24 (G-24), the Non-Aligned Movement, the G77 and the Organisation of African Unity. Addis Ababa is the headquarters of the African Union, the Pan African Chamber of Commerce and Industry, the United Nations Economic Commission for Africa, the African Standby Force and many of the global NGOs focused on Africa. Ethiopia is classified as developing country, with a growth rate was 9.4% from 2010 to 2020. Despite it being based on mixed economy, private sectors are encouraged to invest in properties. Meanwhile, the country regarded as poor in terms of per capita income and Human Development Index. Agriculture is central part of Ethiopian economy, constituting 80% of major sector.