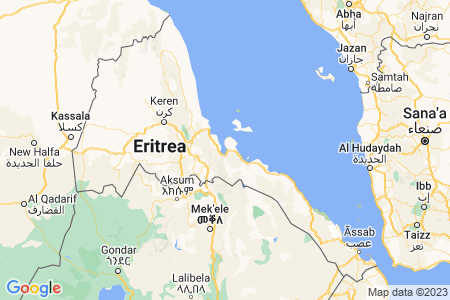 Eritrea ( (listen)), officially the State of Eritrea, is a country in the Horn of Africa region of Eastern Africa, with its capital (and largest city) at Asmara. It is bordered by Ethiopia in the south, Sudan in the west, and Djibouti in the southeast. The northeastern and eastern parts of Eritrea have an extensive coastline along the Red Sea. The nation has a total area of approximately 117,600 km2 (45,406 sq mi), and includes the Dahlak Archipelago and several of the Hanish Islands.
Eritrea is a multi-ethnic country with nine recognised ethnic groups. Nine different languages are spoken by the nine recognised ethnic groups, the most widely spoken language is Tigrinya, the others are Tigre, Saho, Kunama, Nara, Afar, Beja, Bilen and Arabic. Tigrinya, Arabic, and English serve as the three working languages. Most residents speak languages from the Afroasiatic family, either of the Ethiopian Semitic languages or Cushitic branches. Among these communities, the Tigrinyas make up about 55% of the population, with the Tigre people constituting around 30% of inhabitants. In addition, there are several Nilo-Saharan-speaking Nilotic ethnic groups. Most people in the territory adhere to Christianity or Islam, with a small minority adhering to traditional faiths.The Kingdom of Aksum, covering much of modern-day Eritrea and northern Ethiopia, was established during the first or second century AD. It adopted Christianity around the middle of the fourth century. In medieval times much of Eritrea fell under the Medri Bahri kingdom, with a smaller region being part of Hamasien. The creation of modern-day Eritrea is a result of the incorporation of independent, distinct kingdoms (for example, Medri Bahri and the Sultanate of Aussa) eventually resulting in the formation of Italian Eritrea. After the defeat of the Italian colonial army in 1942, Eritrea was administered by the British Military Administration until 1952. Following the UN General Assembly decision in 1952, Eritrea would govern itself with a local Eritrean parliament, but for foreign affairs and defense, it would enter into a federal status with Ethiopia for ten years. However, in 1962, the government of Ethiopia annulled the Eritrean parliament and formally annexed Eritrea. The Eritrean secessionist movement organised the Eritrean Liberation Front in 1961 and fought the Eritrean War of Independence until Eritrea gained de facto independence in 1991. Eritrea gained de jure independence in 1993 after an independence referendum.
Eritrea is a unitary one-party presidential republic in which national legislative and presidential elections have never been held. Isaias Afwerki has served as president since its official independence in 1993. According to Human Rights Watch, the Eritrean government's human rights record is among the worst in the world. The Eritrean government has dismissed these allegations as politically motivated. Freedom of the press in Eritrea is extremely limited, the Press Freedom Index consistently ranks it as one of the least free countries. As of 2021 Reporters Without Borders considers the country to have the overall worst press freedom in the world as all media publications and access are heavily controlled by the government.Eritrea is a member of the African Union, the United Nations, and the Intergovernmental Authority on Development, and is an observer state in the Arab League alongside Brazil and Venezuela.