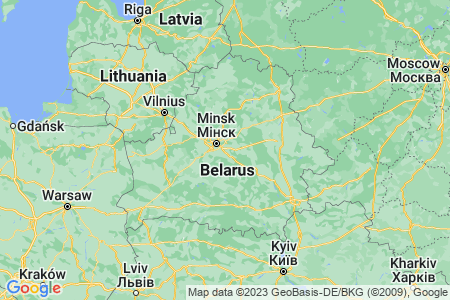 Belarus (; Belarusian: Беларусь [bʲɛlaˈrusʲ]; Russian: Беларусь [bʲɪlɐˈrusʲ]), officially the Republic of Belarus (Belarusian: Рэспубліка Беларусь; Russian: Республика Беларусь) and formerly known as Byelorussia or Belorussia (Russian: Белоруссия), is a landlocked country in Eastern Europe. It is bordered by Russia to the northeast, Ukraine to the south, Poland to the west, and Lithuania and Latvia to the northwest. Its capital and most populous city is Minsk. Over 40% of its 207,600 square kilometres (80,200 sq mi) is forested. Its major economic sectors are service industries and manufacturing. Until the 20th century, different states at various times controlled the lands of modern-day Belarus, including Kievan Rus', the Principality of Polotsk (11th to 14th centuries), the Grand Duchy of Lithuania, the Polish–Lithuanian Commonwealth, and the Russian Empire.
In the aftermath of the 1917 Russian Revolution, different states arose competing for legitimacy amidst the Civil War, ultimately ending in the rise of the Byelorussian Soviet Socialist Republic (Byelorussian SSR) which became a founding constituent republic of the Soviet Union in 1922. Belarus lost almost half of its territory to Poland after the Polish–Soviet War (1919–1921). Much of the borders of Belarus took their modern shape in 1939, when some lands of the Second Polish Republic were reintegrated into it after the Soviet invasion of Poland, and were finalized after World War II. During WWII, military operations devastated Belarus, which lost about a quarter of its population and half of its economic resources. The republic was redeveloped in the post-war years. In 1945, the Byelorussian SSR became a founding member of the United Nations, along with the Soviet Union and the Ukrainian SSR. The parliament of the republic proclaimed the sovereignty of Belarus on 27 July 1990, and during the dissolution of the Soviet Union, Belarus declared independence on 25 August 1991. In 2000, Belarus and Russia signed a treaty for greater cooperation, forming the Union State.
Alexander Lukashenko has served as the country's first president since 1994. Belarus has been labeled "Europe's last dictatorship" by some Western journalists, on account of the country's poor human rights record and Lukashenko's self-described authoritarian style of government. Lukashenko continued a number of Soviet-era policies, such as state ownership of large sections of the economy. Elections under Lukashenko's rule have been widely criticized as unfair and political opposition has been violently suppressed. Belarus is also the only country in Europe officially using the death penalty.Over 70% of Belarus's population of 9.49 million resides in urban areas. More than 80% of the population is ethnic Belarusian, with sizable minorities of Russians, Poles and Ukrainians. Since a referendum in 1995, the country has had two official languages: Belarusian and Russian. The Constitution of Belarus does not declare any official religion, although the primary religion in the country is Eastern Orthodox Christianity. The second-most widespread religion, Roman Catholicism, has a much smaller following; nevertheless, Belarus celebrates both the Orthodox and the Catholic dates for Christmas and Easter as national holidays.Belarus has been a member of the United Nations since its founding; it is also a member of the Commonwealth of Independent States, CSTO, EEU, and the Non-Aligned Movement. Belarus has shown no aspirations for joining the European Union but nevertheless maintains a bilateral relationship with the Union, and likewise participates in two EU projects: the Eastern Partnership and the Baku Initiative.