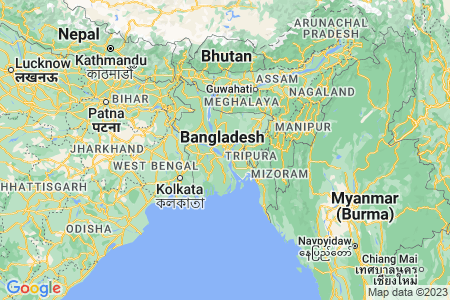 Bangladesh (; Bengali: বাংলাদেশ, pronounced [ˈbaŋlaˌdeʃ] (listen)), officially the People's Republic of Bangladesh, is a country in South Asia. It is the eighth-most populous country in the world, with a population exceeding 163 million people in an area of either 148,460 square kilometres (57,320 sq mi) or 147,570 square kilometres (56,980 sq mi), making it one of the most densely populated countries in the world. Bangladesh shares land borders with India to the west, north, and east, and Myanmar to the southeast; to the south it has a coastline along the Bay of Bengal. It is narrowly separated from Nepal and Bhutan by the Siliguri Corridor; and from China by 100 km of the Indian state of Sikkim in the north. Dhaka, the capital and largest city, is the nation's economic, political, and cultural hub. Chittagong, the largest seaport, is the second-largest city. The official language is Bengali, one of the eastern-most branches of the Indo-European language family.
Bangladesh forms the sovereign part of the historic and ethnolinguistic region of Bengal, which was divided during the Partition of British India in 1947. The country has a Bengali Muslim majority. Ancient Bengal was an important cultural center in the Indian subcontinent as the home of the states of Vanga, Pundra, Gangaridai, Gauda, Samatata, and Harikela. The Mauryan, Gupta, Pala, Sena, Chandra and Deva dynasties were the last pre-Islamic rulers of Bengal. The Muslim conquest of Bengal began in 1204 when Bakhtiar Khalji overran northern Bengal and invaded Tibet. Becoming part of the Delhi Sultanate, three city-states emerged in the 14th century with much of eastern Bengal being ruled from Sonargaon. Sufi missionary leaders like Sultan Balkhi, Shah Jalal and Shah Makhdum Rupos helped in spreading Muslim rule. The region was unified into an independent, unitary Bengal Sultanate. Under Mughal rule, eastern Bengal continued to prosper as the melting pot of Muslims in the eastern subcontinent and attracted traders from around the world. Mughal Bengal became increasingly assertive and independent under the Nawabs of Bengal in the 18th century. In 1757, the betrayal of Mir Jafar resulted in the defeat of Nawab Siraj-ud-Daulah to the British East India Company and eventual British dominance across South Asia. The Bengal Presidency grew into the largest administrative unit in British India. The creation of Eastern Bengal and Assam in 1905 set a precedent for the emergence of Bangladesh. In 1940, the first Prime Minister of Bengal supported the Lahore Resolution with the hope of creating a state in eastern South Asia. Prior to the partition of Bengal, the Prime Minister of Bengal proposed a Bengali sovereign state. A referendum and the announcement of the Radcliffe Line established the present-day territorial boundary of Bangladesh.
In 1947, East Bengal became the most populous province in the Dominion of Pakistan. It was renamed as East Pakistan with Dhaka becoming the country's legislative capital. The Bengali Language Movement in 1952; the East Bengali legislative election, 1954; the 1958 Pakistani coup d'état; the Six point movement of 1966; and the 1970 Pakistani general election resulted in the rise of Bengali nationalism and pro-democracy movements in East Pakistan. The refusal of the Pakistani military junta to transfer power to the Awami League led by Sheikh Mujibur Rahman led to the Bangladesh Liberation War in 1971, in which the Mukti Bahini aided by India waged a successful armed revolution. The conflict saw the 1971 Bangladesh genocide and the massacre of pro-independence Bengali civilians, including intellectuals. The new state of Bangladesh became the first constitutionally secular state in South Asia in 1972. Islam was declared the state religion in 1988. In 2010, the Bangladesh Supreme Court reaffirmed secular principles in the constitution.Bangladesh is a unitary parliamentary constitutional republic based on the Westminster system. Bengalis make up 98% of the total population of Bangladesh, and the large Muslim population of Bangladesh makes it the third-largest Muslim-majority country. The country consists of eight divisions, 64 districts and 495 subdistricts. It maintains the third-largest military in South Asia after India and Pakistan; and has been a major contributor to UN peacekeeping operations. A middle power in the Indo-Pacific, Bangladesh is an emerging economy ranked as the 41st-largest in the world by nominal GDP, and the 29th-largest by PPP. It hosts one of the largest refugee populations in the world due to the Rohingya genocide. Bangladesh faces many challenges, including the adverse effects of climate change, poverty, illiteracy, corruption, authoritarianism and human rights abuses. However, the poverty rate has halved since 2011 and the country is expected to become a middle income country in this decade. Once a historic center of the muslin cloth trade, Bangladesh is now one of the world's largest modern garment exporters.