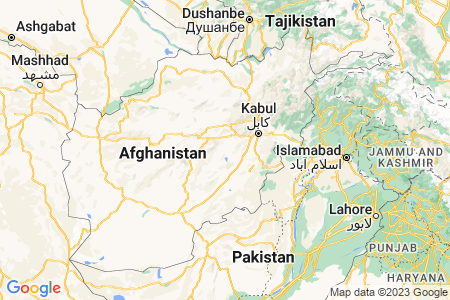 Afghanistan, officially the Islamic Emirate of Afghanistan, is a landlocked country located at the crossroads of Central Asia and South Asia. Referred to as the Heart of Asia, it is bordered by Pakistan to the east and south, Iran to the west, Turkmenistan to the northwest, Uzbekistan to the north, Tajikistan to the northeast, and China to the northeast and east. Occupying 652,864 square kilometers (252,072 sq mi) of land, the country is predominantly mountainous with plains in the north and the southwest, which are separated by the Hindu Kush mountain range. As of 2021, its population is 40.2 million (officially estimated to be 32.9 million), composed mostly of ethnic Pashtuns, Tajiks, Hazaras, and Uzbeks. Kabul is the country's largest city and serves as its capital.
Human habitation in Afghanistan dates back to the Middle Paleolithic era, and the country's strategic location along the historic Silk Road has led it to being described, picturesquely, as the ‘roundabout of the ancient world’. Popularly referred to as the graveyard of empires, the land has historically been home to various peoples and has witnessed numerous military campaigns, including those by the Persians, Alexander the Great, the Maurya Empire, Arab Muslims, the Mongols, the British, the Soviet Union, and most recently by an American-led coalition. Afghanistan also served as the source from which the Greco-Bactrians and the Mughals, among others, rose to form major empires. The various conquests and periods in both the Iranian and Indian cultural spheres made the area a center for Zoroastrianism, Buddhism, Hinduism, and later Islam throughout history.The modern state of Afghanistan began with the Durrani dynasty in the 18th century, with the Durrani Afghan Empire being formed by Ahmad Shah Durrani. The Durrani Empire led conquests in which, at its peak, encompassed land that spanned from eastern Iran to northern India. Following its decline and the death of Ahmad Shah Durrani, and Timur Shah, it was divided into multiple smaller independent kingdoms, including but not limited to: Herat, Kandahar and Kabul. Afghanistan would be reunited in the 19th century after wars of unification led by Dost Mohammad Khan, where he conquered the independent principalities in Afghanistan. Dost Mohammad died in 1863, weeks after his last campaign to unite Afghanistan, and as a result, threw Afghanistan back into civil war with his successors. During this time, Afghanistan became a buffer state in the Great Game between the British Empire (in British-ruled India) and the Russian Empire. From India, the British attempted to subjugate Afghanistan but were repelled in the First Anglo-Afghan War. However, the Second Anglo-Afghan War saw a British victory and the successful establishment of British political influence over Afghanistan. Following the Third Anglo-Afghan War in 1919, Afghanistan became free of foreign dominance, and eventually emerged as the independent Kingdom of Afghanistan in June 1926 under Amanullah Khan. This monarchy lasted almost 50 years, until Zahir Shah was overthrown in 1973, following which the Republic of Afghanistan was established.
Since the late 1970s, Afghanistan's history has been dominated by extensive warfare, including coups, invasions, insurgencies, and civil wars which would end twice with the victory of the Islamic fundamentalist Taliban. In 1979 the Soviet Union invaded Afghanistan. Mujahideen fought against them in the Soviet–Afghan War and continued fighting amongst themselves following Soviet withdrawal in 1989. The Taliban controlled most of the country by 1996, but their Islamic Emirate of Afghanistan received little international recognition before its overthrow in the 2001 United States invasion of Afghanistan. The Taliban returned to power in 2021 following Kabul's capture by the Taliban and the concurrent overthrow of the Islamic Republic of Afghanistan, ending the 2001–2021 war. Although initially claiming to form an inclusive government for the country, the Taliban in September 2021 re-established the Islamic Emirate of Afghanistan with an interim government made up entirely of Taliban members; the regime currently remains internationally unrecognized.Afghanistan is prominently rich in natural resources, including lithium, iron, zinc, and copper, amongst many others. It is also the world's largest producer of opium, second largest producer of cannabis, and third largest of both saffron and cashmere. The country is a member of the South Asian Association for Regional Cooperation and a founding member of the Organisation of Islamic Cooperation. Due to the effects of war in recent decades, the country has dealt with high levels of terrorism, poverty, and child malnutrition. Afghanistan's economy is the world's 96th-largest, with a gross domestic product (GDP) of $72.9 billion by purchasing power parity; the country fares much worse in terms of per-capita GDP (PPP), ranking 169th out of 186 countries as of 2018.